This temple is associated with the legend of King Vikramaditya to become king. Recognizing that youth are sacrificed every day the mother was hungry. The young boy was declared king of Ujjain, then hungry mother was eating it. See the sad lament of a young mother had promised her that her son’s place Vikramaditya king of the city and hungry mother will suffer.

The whole city was inaugurated by King Vikramaditya ordered savory food decorating. Place – Place fifty six banquet given sentence. Vikramaditya hunger hungry mother before making your diet over and blessed be he king Vikramaditya Prjapalk Chakraborty. Then Vikramaditya built this temple in his honor.

The priest father Amar Lal Malviya said that many of the mothers was a freak of human sacrifice. King Vikramaditya goddess promised to tackle the problem in his temple established across the river. Word of the Divine powers, he was invited to dinner. And dessert varieties planted by the Vikramaditya arranged in a Bhojshala. Then the nuts on a Takht – Dessert by human mannequin lying and hid himself under Takht.

Happy with the food and eat at night they were goddesses. Goddess began to talk among themselves, then it would be nice to invite us like kings. When all that was triggering the curiosity of a goddess who at Takht – the thing is hidden.

Let the other ladies said, whatever we do, we are satisfied to go, but he kept the mannequin breaking Goddess disobeyed and ate at Takht. Devi said happily – who kept the food so delicious. Then come out from under Takht Vikramaditya and he said that I have kept.

Devi said – and say the word, what postulate. Vikramaditya said – mother says I am asking you to please remain seated just across the river, do not ever come into the city. Devi expressed surprise at the cleverness of the king and said, well, you have to follow the Word. All the other ladies on the incident put the Divine Name hungry mother. 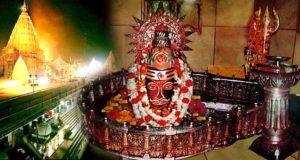